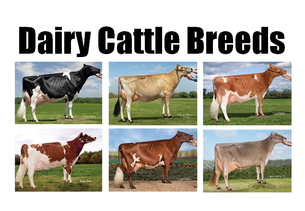 Did you know there are over 800 breeds of cows recognized globally. And even though there are a large number of cattle breeds, there are only a few breeds that specialize in milk production. ​

Dairy cattle are those breeds that produce larger volumes of milk for a longer period of time than other cows. In the United States today, there are 6 main breeds of Dairy cattle.
​The most common dairy breeds are Holstein, Jersey, Brown Swiss, Guernsey, Ayrshire, and Milking Shorthorn.

​
​
A farmer- depending on his unique situation or geographic location- may choose cattle breeds with different characteristics for his herd. These 6 dairy breeds have become common because they each have some unique characteristics which make them “ideal” in different situations.

When people think about cows, black and white Holsteins usually come to mind. That is because the Holstein cow is the most popular dairy cow in the world. Most dairy farms milk Holsteins, since they are the leading milk producers of all the dairy breeds. Holsteins produce the highest volumes of milk. Interestingly, the Holstein’s spots are like fingerprints, and no two cows have the same spots. Some Holstein cows possess the red gene making them red and white instead of black and white.
The Holstein cow originated in the Netherlands and by a misnomer became called Holstein. They are called Holsteins in the U.S. and Frisians in the rest of the world. The first Holstein cows arrived in America in 1621-1664. When Dutch farmers began to settle New York, they brought their cows with them from the Netherlands. The most famous Holstein cow was President Taft’s cow Pauline Wayne who grazed on the White House lawn.
What makes them “Ideal” – Holsteins excel at producing milk, and are the high performance athletes of cattle. They are unrivaled in terms of milk production volume. Their calm, relaxed nature make them easy to handle. 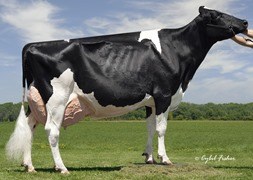 Guernseys are fawn in color with white spots. The Guernsey breed originated on the Isle of Guernsey in the English Channel between England and France. Interestingly, the Isle of Guernsey is near the Isle of Jersey where the Jersey cow originated. The Guernsey breed is a less popular breed of dairy cow, with a global population fewer than 10,000 animals.
Guernsey Cows are renowned for their special milk which is golden in color. The milks golden color is due to large amounts of beta-carotene which is a source of Vitamin A. Beta-carotene has been found to reduce the risk of certain types of cancer. 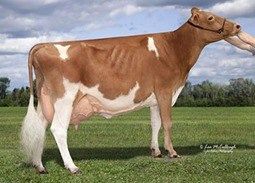 The amount of Jersey cattle in the United States is growing rapidly due to their excellent ability to produce butterfat and protein. The Jersey’s milk has much more butterfat and protein than Holstein milk, making it better for cheese production. Also Jerseys are very efficient at converting feed to milk. Jerseys are the smallest dairy breed, and their small stature requires less energy to maintain normal body functions so they use the extra energy to produce milk. They also have great character
Jerseys are typically brown, but sometimes can be brown and white. The shade of brown can vary quite a bit from light tan to almost black. Interestingly, the Jersey cow come from a small island in the English Channel, between England and France, where they were specially breed, and isolated from outside influence for over two hundred years.
What makes them “Ideal” – Jerseys produce milk with the highest components (protein, and butterfat) and their milk is ideal for making cheese. Their small size also makes them one of the most efficient converters of feed to milk. 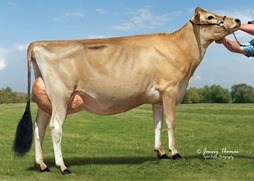 Brown Swiss are the largest of the dairy breeds, and as their name implies usually solid brown in color. The average Brown Swiss cow weighs about 1,500 lbs. which makes them the biggest and strongest dairy breed. Their strong stature makes them very resilient, and free of common cattle problems. Like the Jerseys, Brown Swiss produce milk with large amounts butterfat and protein.
The Brown Swiss originated in the Alps in Switzerland. The harsh climate in the Alps demands a special type of cow that can withstand the natural elements. Not surprisingly because of this, the Brown Swiss are very resilient and can tolerate fluctuating weather – either hot or cold.
What makes them “Ideal” – Brown Swiss are strong, hardy cows. It is this strength and power that sets them apart from other dairy breeds. Being the biggest dairy breed, their durability and longevity are great characteristics. 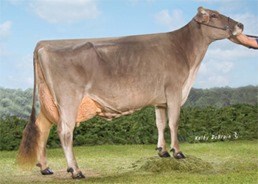 Ayrshire cattle are red and white, but the color can vary from orange to dark brown. The Ayrshire breed is a very rugged and durable breed with many desirable health traits. Interestingly, Ayrshire are sometimes called Dunlop cattle, and are known as Dunlop cattle in New Zealand.
The Ayrshire originated in Scotland where they were specially bred with animals being brought in from the Netherlands. These animals were then exported around the world to many different locations around the globe. 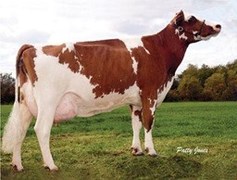 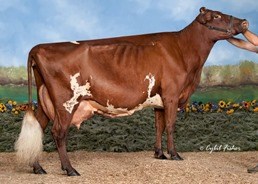