Ag land, water at risk because of development 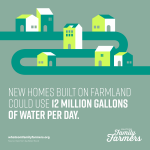 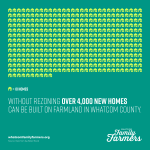 For a number of months Whatcom Family Farmers have been sounding the alarm that adjudication will lead to the loss of farms and development of farmland, hurting salmon and many other species which depend on the habitat that farmland provides. Many people mistakenly believe that farmland in Whatcom County is protected from development. Unfortunately that isn’t the case. Approximately 30% of Whatcom County’s 100,000 acres of farmland is in some form of rural zoning designation. This means that the land is able to be subdivided into smaller lots, often 2 acres in size, with each lot having its own home. Additionally, farmland near existing urban areas can be annexed by expanding municipalities seeking room to support a growing population.

Even land that is zoned as agricultural land often has the ability for homes to be built on the lot if one does not already exist. Development of agricultural land can have a number of impacts on natural resources. One of those impacts is the introduction of new impervious surfaces that do not permit rain to percolate through into groundwater. Surfaces such as roofs, driveways and sidewalks decrease the amount of land that is able to absorb groundwater. They also build up pollutants which during a rainfall event are often washed away into streams and rivers.

An additional impact on natural resources is the installation of new wells for these homes. Under Washington State law wells can be drilled to supply water to a home that does not have access to a municipal water source. These wells do not require a permit, and home owners are permitted to withdraw 3000 gallons of water per day. In fact in Whatcom County a building permit will not be issued until a well has already been drilled. Taking away a farmer’s ability to irrigate a crop will strongly encourage the creation of building lots where wells can be drilled free of permits.

Although 3,000 gallons per day may seem like a small amount, when you consider the number of new homes which may be built on agricultural land it has a significant impact on our water supply. Right now in Whatcom County, without any rezoning it would be possible to build over 4000 new homes on agricultural land. Some of that land is currently zoned as agriculture, and some is zoned as rural. If all of these homes were built and wells were drilled to supply water to them at maximum levels it would lead to new legal withdrawals of over 12 million gallons of water per day, the equivalent volume to 18 cfs.

If farming in our county is not economically viable, land owners will have no choice but to parcel out some of their land or develop it themselves in order to recoup their investments.

We are blessed in Whatcom County with incredibly productive agricultural land and a farming community that has shown a wonderful passion for growing our food. If we let those things slip through our fingers, it will be an incredible loss for our community, our culture and our environment.