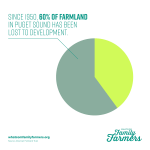 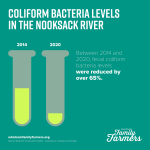 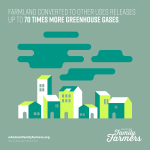 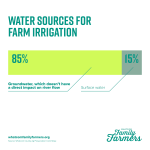 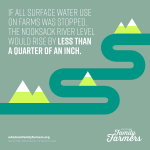 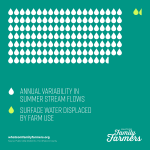 Although some have suggested that adjudication is the best way to protect salmon runs, the reality is that it will put farms out of business, and put salmon in harm’s way. USDA data shows that Puget Sound has already lost 60% of its farmland since 1950 – at that rate the last acre of farmland could be paved over by 2053 (as shown by American Farmland Trust). The conversion of even more farmland in Whatcom County would be devastating for salmon, since farmland does a much better job of protecting salmon habitat and maintaining high water quality than paved areas. In fact, between 2014 and 2020, fecal coliform bacteria levels in the Nooksack River were reduced by over 65% (data from the Portage Bay Shellfish Protection District). Additionally, research by the American Farmland Trust shows that farmland converted to other uses releases up to 70 times more greenhouse gases than if it had stayed as farmland (source).

Flows in the river are also a much more nuanced issue than some would have you believe. Over 85% of farm irrigation water comes from groundwater (data from PUD No. 1 of Whatcom County and the Ag Water Board), which doesn’t have a direct impact on river flow – the exact quantity and timeliness of any impact varies depending on a number of factors. Given these numbers, if all surface water use on farms was stopped, the Nooksack River level would rise by less than a quarter of an inch, even during peak irrigation season (based on USGS data measured at the Ferndale gauge). In fact, the natural variability in summer streamflows from year to year is over 100 times greater than the amount of surface water displaced by farm use (USGS data).

In the end, the result is clear – putting farms out of business, and the resulting development of farmland that protects salmon habitat, is not worth a quarter-inch increase in the river level. That’s why Whatcom County farmers support a collaborative approach to solving watershed issues.