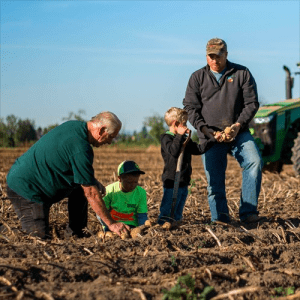 A recent letter to the editor in the Lynden Tribune has sparked a response from an expert. Dillon Honcoop spoke with Washington State University scientist Chris Benedict after a letter to the editor raised fears that a specific pesticide was being used in local potato farming.

The letter claimed local potato farmers use Roundup on their fields. Benedict debunks that.

“It would not be a good decision to apply Roundup, or the active ingredient Glyphosate, because that particular herbicide is referred to as a systemic herbicide — which means it can be applied to one portion of the plant and then it’s translocated throughout,” Benedict explained. “As you can imagine, potatoes are a below ground tuber, and that’s where farmers make their living — in particular seed potato farmers — that tuber is very valuable, and so applying something like Glyphosate to potatoes would ultimately, eventually, kill off the plant, and it would be very costly. It would not be a smart move.”

Benedict says he doesn’t know of any potato farmer that puts Glyphosate on their crop. The common practice with potato farmers is something referred to as vine kill. It’s not a systemic chemical, just localized, and kills off the vines.

“What that does is allow for the skin to set better,” he said. “So when those potatoes are going through harvest they can withstand the equipment and whatnot.”

The vines are then mowed and the potatoes are not affected by the process.

Benedict says he deals with a lot of situations where people reach out about false information.

“We commonly respond to inquiries from people who are sort of questioning a variety of different farming practices and I think it comes down to education is really important,” he said.

You can listen to the full interview here: