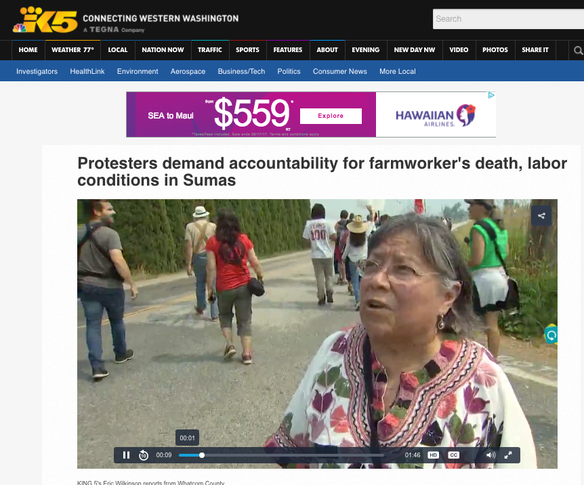 With the continuing and widespread media coverage of the worker action and the death of a guest farm worker at a Sumas berry farm, we believe it is important to distribute information that the farm is providing. With one exception, no media outlet covering this story has communicated very much of the details provided. There are two very different explanations of what happened here and both cannot be true. Current reports however are strongly one-sided, which is why we believe it important to communicate the farm’s statement.

Sarbanand Farms has operated a blueberry farm near the Canadian border in Sumas, Washington, since 2011. This year, the company hired more than 600 employees to help harvest the blueberry crop. Most of these employees are H-2A guest workers. They have all traveled long distances to work with us and the tasks they perform are very important.
Sarbanand Farms pays for all their travel costs, including meals while traveling, hotels and fees at the border, all costs incurred during their journey from their homes to our housing, which we built just for them, also without cost. Once they arrive, we guarantee them a minimum of 35 hours of work the first week, even if the crop is not ready harvest. So, it is always our goal to provide them with the best working and living conditions we can. Our company makes every effort to comply with all regulatory requirements. We follow well established policies concerning the work environment and we respond appropriately to all complaints or concerns.
The six-year-old farm is equipped with state-of-the-art facilities. These include newly constructed living quarters designed to meet all regulatory standards. Amenities at the farm include a soccer field, camp-wide wi-fi, big screen satellite TVs, laundry facilities, catered meals at low cost, and a fleet of buses for regular trips to town for shopping. After work, everyone is free to enjoy and explore the greater Sumas area. We have sponsored barbeques and an end of season day at a local lake. We provide free transportation to local doctors and healthcare facilities. We have bilingual farm management. State agencies have inspected and approved our facilities every year.
We were all deeply saddened by the loss this past week of Mr. Honesto Silva Ibarra, even after he received the best medical care and attention possible as soon as his distress came to our attention. Our management team responded immediately and worked closely with his family each step of the way. Because of our good relationship with them, the family has provided us with additional information about Mr. Silva’s health issues, and they are helping to verify the facts surrounding his death.
Here are the facts that have been verified so far:

Sarbanand Farms has written policies that cover working conditions and requirements depending on weather conditions. All employees were provided with a copy of these policies, both in English and in Spanish. When temperatures get higher that allowed by these policies, work stops.

The company conducts full orientation and worker safety meetings with all harvest workers as they arrive at the Sumas farm. Company policies encourage all employees to report illnesses, concerns and all other problems they may have. The company responds to all such requests in a reasonable and appropriate manner. We continue to hold regular meetings with workers almost daily to review these procedures.

Some of our H-2A workers were terminated on August 5 after they refused to go to work the previous day. We have provided them with their final paychecks.

Questions have also been raised about whether H-2A visas have expired for workers who extended their stays. Most of the H-2A workers came to the farm after working on earlier jobs in California. This required an extension of their visas. The company timely applied to the US Citizenship and Immigration Services at the beginning of July to extend visas for all these workers. We have full expectation that the visas are all in order and they will be made available to the workers upon receipt from the government agencies.

For now, workers who have left our employment still have their passports and they are free to return home. We will also be providing them with a letter from the company explaining the status of the visa extension paperwork, which they can take with them. When received, the extensions will be sent to these workers, as well, so that they remain eligible for future H2A work. We are working diligently to try to make this happen. These efforts include:

The Washington State Department of Labor and Industries is conducting an on-site investigation at the farm to verify that working conditions continue to meet or exceed regulatory standards. The company is cooperating fully with the investigation.

Since the farm began operation in 2011, it has enjoyed an exemplary record for safety and good working conditions. The Department of Labor and Industries has indicated that its investigation will continue over the course of the next six to eight months.

Back on the farm, there are over 500 H-2A workers who continue to work on the harvest, which has been proceeding smoothly. Daily productivity has increased. Worker morale is good. All H-2A workers are being paid according to law and as required by their H-2A employment contracts. They are all being paid more than minimum wage. Earlier this month, the company had also implemented a bonus program, pursuant to which well over 400 employees so far have received additional bonus compensation.

Of course, we have been frustrated and disappointed that the situation regarding our workers has been misunderstood, exploited and sensationalized. But now that the facts are becoming known, we are hopeful that we can carry on with providing a safe and healthful product to consumers.

At Sarbanand Farms, we remain committed to providing a safe, clean and supportive work environment for all our employees and we will continue to do so for the benefit of everyone.