Through the EPA, our government spent at least $570,000 of your tax dollars on this false, malicious attack on farmers. Not only that, the records and statements by the campaign’s sponsors state that EPA officials were intimately involved in planning the content and direction. This is an illegal campaign violating numerous state and federal laws, and it goes on even though EPA Region 10 Director McLerran has told a Congressional Chairman that it was stopped! We must ask our elected representatives to hold government employees accountable if we are to have any trust in government at all. 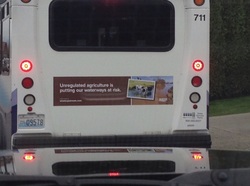 Wait until you see who is paying for it!

The bus ad on WTA has brought the ad campaign of the group behind Whatsupstream.com to our farmers’ attention. You should know, this is the tip of the iceberg. The lies, distortions, exaggerations and malicious attacks are bad enough. What’s worse, we are help paying for it through a federal EPA grant.

While we may want to complain to WTA or the Bellingham Herald or other media outlets that are running these false ads, we can have far more impact by making clear to our elected representatives how strongly we object to this use of our taxpayer money.

First, learn more about how disgusting and dishonest these attacks are by going to savefamilyfarming.org, a new website dedicated to telling the truth about farming and countering the misinformation found on whatsupstream.com.

Next, call or email your federal elected representatives–those who are charged with oversight of federal agencies including the EPA. The phone numbers and emails or email forms are below.

Don’t stop there. Let the local EPA office know how you feel. You may remind them that in 2014 this very office was criticized for poor oversight of their grants. (see savefamilyfarming.org for the full report).

Then, let Chairman Brian Cladoosby, Chair of the Swinomish Tribe know that we family farmers, his friends and neighbors, do not appreciate the tribe’s involvement in this dishonest and malicious attack on farmers and farming.

Be assured this is just the beginning of our effort to tell the truth about our family farmers. We believe those behind this effort intend to use the legislative or initiative process to seriously damage our farms, futures and our communities. We must and will stand together in opposing this outrageous and unwarranted attack.